To share your memory on the wall of Mr. Markelius Chambers , sign in using one of the following options:

Provide comfort for the family by sending flowers or planting a tree in memory of Mr. Markelius Chambers

Provide comfort for the family by sending flowers or planting a tree in memory of Mr. Markelius Chambers

Markelius received his education from Nash Rocky Mount Public Schools. He attended Light of Peace Baptist Church under the leadership of Bishop Lonnie Braswell. His aunt Sandra & Roy Knight were very instrumental in the upbringing of Markelius. He was a guy who loved his family. After the passing of his father he vowed that he would take care of his family and without doubt he did just that.

To send flowers to the family or plant a tree in memory of Mr. Markelius Leon Chambers , please visit our Heartfelt Sympathies Store.

We encourage you to share your most beloved memories of Mr. Markelius here, so that the family and other loved ones can always see it. You can upload cherished photographs, or share your favorite stories, and can even comment on those shared by others. 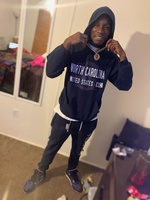