To share your memory on the wall of Mr. David Pearsall , sign in using one of the following options:

Provide comfort for the family by sending flowers or planting a tree in memory of Mr. David Pearsall

Provide comfort for the family by sending flowers or planting a tree in memory of Mr. David Pearsall


A Time to Be Born
David Kelvin Pearsall, better known as “Peabody” was born to Evelyn Grace Faircloth and James Daniel Pearsall on August 26, 1977 in Wayne County, NC.

A Time to Live
David received his formal education in Wayne County at Goldsboro High School. He was a long haul trucker for over 20 years. He was also employed by Arbys.

A Time to Die
David Kelvin Pearsall better known as “Peabody” departed this life on January 6, 2021 at the Wayne UNC Health Care Center. He was the son of Evelyn Grace Coley.

To send flowers to the family or plant a tree in memory of Mr. David Kelvin "Pea Body" Pearsall , please visit our Heartfelt Sympathies Store.

We encourage you to share your most beloved memories of Mr. David here, so that the family and other loved ones can always see it. You can upload cherished photographs, or share your favorite stories, and can even comment on those shared by others.

Posted Jan 08, 2021 at 02:43pm
Sending my condolences to The Pearsall family. I grew up with Peabody in Seymour Johnson Holmes and his brother Adam (Big Joe) are classmates. His mother Mrs. Evelyn Coley is my church mom and i want to say Peabody was a very nice and down to earth person and i am praying for his daughter and granddaughter and his brothers Daniel and James. I will be keeping the family in my prayers
Comment Share
Share via: 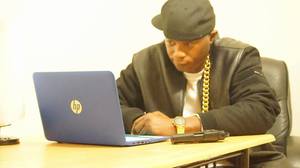