To share your memory on the wall of Mr. Kenneth Raiford , sign in using one of the following options:

Provide comfort for the family by sending flowers or planting a tree in memory of Mr. Kenneth Raiford

Provide comfort for the family by sending flowers or planting a tree in memory of Mr. Kenneth Raiford

Print
Goldsboro - The Management and Staff of Serenity Memorial Funeral Home extend its sincerest condolences to the family of Kenneth "Ookie" Raiford, 57, who transitioned on Saturday, October 3, 2020.


Kenneth “Ookie” Raiford was ... Read More
Goldsboro - The Management and Staff of Serenity Memorial Funeral Home extend its sincerest condolences to the family of Kenneth "Ookie" Raiford, 57, who transitioned on Saturday, October 3, 2020.

He attended the Wayne County Public Schools and then to Job Corp received a trade ion brick mason. He worked at Borden manufacturers until his health declined and then began doing odd jobs around town.

He was predeceased in death by his parents and one brother, Timothy Raiford.

He was a loving, devoted father, grandfather, great-grandfather, brother, and friend. No one was exempt from getting told off by Ookie.

To send flowers to the family or plant a tree in memory of Mr. Kenneth ""Ookie" " Raiford , please visit our Heartfelt Sympathies Store.

We encourage you to share your most beloved memories of Mr. Kenneth here, so that the family and other loved ones can always see it. You can upload cherished photographs, or share your favorite stories, and can even comment on those shared by others.

Posted Oct 11, 2020 at 09:14am
I remember when i stayed on hugh street mr ookie would come down my neighbor Lynette and chill will apartment and thats when i first met mr ookie ..you can never forget the man who talk the most junk to be in a wheelchair..but he was a good guy made me laugh everyday... Thank you for being the sunshine in my day and i will continue to keep a laugh here and there ... To the family keep your head up and you will always be in my prayers....

Posted Oct 09, 2020 at 01:04pm
From the Family of the late William Hobbs Sr. So very sorry for your loss he was a very sweet and loving person.. To love Ookie was to know him very sweet person.. Praying for strength for the family to endure what God has done may the strength of the lord be with each of you..
Comment Share
Share via:
JG

Posted Oct 06, 2020 at 11:00pm
Mr Ookie u will and already be truly missed. I want never forget what u told me. Love u. Gonna miss seeing u. Traebug and Kornegay family.
Comment Share
Share via: 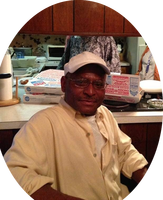