To share your memory on the wall of Gregory Hill , sign in using one of the following options:

Gregory Bernard Hill was born on February 27, 1968, to Lucille Hill and the Late Sherman Hill in Wayne County, NC. He was the second child of Four children.

He received his formal education at Charles B. Aycock High School and was an graduate of the class of 86’. He would later go on to enlist in the United States Navy. He worked for a number of years as a tire repairman for Prince Tires and other local tire companies. He loved to spend time with his family, especially his grandchildren, nieces and nephews.

He was preceded in death by his father Sherman Hill, and one nephew; Tyler Lamar Hill.

To send flowers to the family or plant a tree in memory of Gregory Bernard Hill , please visit our Heartfelt Sympathies Store.

We encourage you to share your most beloved memories of Gregory here, so that the family and other loved ones can always see it. You can upload cherished photographs, or share your favorite stories, and can even comment on those shared by others. 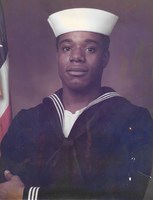