To share your memory on the wall of Deacon Alfonza Blount , sign in using one of the following options:

Print
La Grange - Deacon Alfonza Blount, 83, transitioned from this earthly life on Saturday at the Vidant Medical Center, Greenville, NC.
In the Beginning

Deacon Alfonza “Pop” Blount was born on January 27, 1937 in Greene County, NC to the late Arthur and Gertrude Blount. The family would move to La Grange, NC and there he would attend the Lenoir County Public school system and Frink High School. The Blount home was a Christian home and the family were faithful members of The St. Rest Holiness Church. Those experiences would later spark something in Alfonza that would follow him throughout his life.
In 1955, he would marry the late Christine Miles and from that union 3 children were born. Like most ambitious black men during that time, Al wanted more than the South had to offer, so he and his family moved to Newark, New Jersey.

His Professional Life
He worked several jobs to support the family but God had a plan. He landed a job at Chalet Concrete Company that would change his life forever. After a few faithful years, his boss, a man he affectionately called Chief would offer Al the opportunity to open his own business. He took advantage of the offer and launched his own business, Blount Maintenance Company. The business grew and soon he had a prestigious clientele. His children worked many unwanted late nights helping their dad keep his business a float and with integrity. He would also employ his nieces and nephews when they would visit but if you wanted to get paid, you had to work. Al was blessed throughout the over 40 years in the business and was able to purchase a home in the predominantly white neighborhood of Maplewood, New Jersey in the early 80’s. He was a man of many talents, but landscaping was his passion. There wasn’t anything he couldn’t do.

His Everyday Life
As a young man, Alfonza was always health conscious. He was an amatuer body builder and he trained and received a Black Belt in Karate. Back then he would amaze the children with his skill of breaking bricks with his bare hands. He was very stylish too and enjoyed the latest fashions in moderation. His Sunday wear was impeccable and he loved his white shoes. To match his stylish wardrobe was his always clean and always smelling good car. He was also quite the comedian, if ever in his company sooner or later he would have you laughing. He loved good home cooking and at one time enjoyed homemade desserts like Peach Cobbler.

His Spiritual Life
The bible says train up a child in the way he should go and when he is old, he will not depart from it. Having had that home training, now a young man, Al sought refuge for his soul. While searching, he would sit under the ministries of the late Apostle Arturo Skinner and the late Rev. R.H. Schambach. His soul would finally find refuge 30 miles away in Brooklyn, New York at The Tabernacle of Prayer for All People under the auspices of the late Apostle Johnny L. Washington. There he was ordained a Deacon, Trustee and Armor Bearer and served faithfully until relocating to North Carolina in 2006. Deacon Blount was a man of integrity, a man of prayer, a man of praise and worship. He was a man of wisdom, a man of much love and above all a man of God. After returning to North Carolina, he once again sought a place of worship under the leadership of Apostle Lawrence Bogier at The Tabernacle of Prayer For All People, Goldsboro, NC. It was there he met and married Carolyn Lee. God would later lead him to his final place of worship, The Light Church of Clayton where he served faithfully till his passing. He loved to sing God’s praises and

To send flowers to the family or plant a tree in memory of Deacon Alfonza Blount , please visit our Heartfelt Sympathies Store.

We encourage you to share your most beloved memories of Deacon Alfonza here, so that the family and other loved ones can always see it. You can upload cherished photographs, or share your favorite stories, and can even comment on those shared by others.

Love Mikki, Nise, Teresa, Cynthia & Felicia. Your , The Anderson Family, and others have sent flowers to the family of Deacon Alfonza Blount .
Show you care by sending flowers

Posted Feb 22, 2020 at 09:34pm
We send our love, prayers, and condolences to Aunt Carolyn and Family, The Blount Family, The Church Families (The Light Church of Clayton, The Tabernacle of Prayer for All People), and loving friends. With love and respect Queen Wilder, Vanessa Arnette and Family.
Comment Share
Share via:
JH

Posted Feb 21, 2020 at 11:23am
Deacon Alfonzo always had a beautiful smile on his face. He had the sweetest spirit that remained consistent every time we greeted. My thoughts and prayers are with you Mother Lee.
Comment Share
Share via:
L

Posted Feb 21, 2020 at 10:39am
To the Blount Family as you grieve know that we are remembering you and honoring the memory of your DAD "Deacon Alfonza Blount", just know we love you and you are in our prayers our brother in law Thel.

Trustees and Men of The Light Church

Posted Feb 19, 2020 at 07:00am
To Mother Carolyn Lee Blount from The Trustees and Men of The Light Church. We are here for you and thank God for a life well lived.

Trustees and Men of The Light Church purchased flowers for the family of Deacon Alfonza Blount . Send Flowers 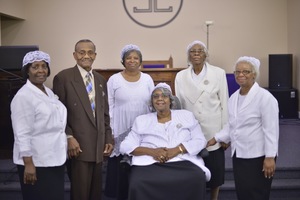 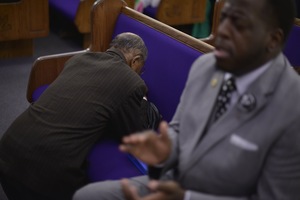