To share your memory on the wall of Lovelace "Bruh" Williams, sign in using one of the following options:

Provide comfort for the family of Lovelace "Bruh" Williams with a meaningful gesture of sympathy.

Print
My life's been full, I savoured much. Grieve if you will, but not for long.
I am at peace my soul is at rest.

Lovelace J. Williams son of the late Lovelace Williams and the late Lillie Mae Artis was born on October ... Read More
My life's been full, I savoured much. Grieve if you will, but not for long.
I am at peace my soul is at rest.

Lovelace J. Williams son of the late Lovelace Williams and the late Lillie Mae Artis was born on October 31, 1943, in Greene County, NC.

He quietly and peacefully departed this life on June 22, 2019, at the Vidant Medical Center, in Greenville, NC.

In 1966, he married Frances K. Thigpen and to this union, they share eight children.

We encourage you to share your most beloved memories of Lovelace "Bruh" here, so that the family and other loved ones can always see it. You can upload cherished photographs, or share your favorite stories, and can even comment on those shared by others.

Posted Jun 25, 2019 at 09:07pm
Our prayers are with the entire Williams family. We are asking God's peace and love upon you.
Apostle Daniel and Deborah Uzzell
Comment Share
Share via:
S

Posted Jun 25, 2019 at 07:26pm
To Williams family,
Our continues prayers 🙏 are with you know at this time and always!
Love
Vera and Shevonne Coley, Maggie Coley Neal and family and Wayne Middleton!!!!
Comment Share
Share via:
S

Posted Jun 25, 2019 at 07:22pm
To the Williams Family,
Our condolences and prayers are with you the family. We will continue to pray for your family!!!
Love you all Barbara, Quanta', Shanika Holden,and Bobby E. Artis
Comment Share
Share via:
TG 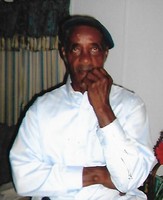